After Tuesday’s action each side will have played at least once and the night sees the much anticipated entrance of the Belgians. Marc Wilmots’ side contain some of the most exciting players in Europe but can they get their campaign off to a winnings start against Algeria?

Meanwhile, Russia take on South Korea while Brazil play their second game of the tournament against Mexico.

32 years ago, Algeria caused a huge upset when they beat the mighty West Germans by two goals to one in the 1982 tournament. In more recent times, the 2010 squad in South Africa drew 0-0 with England but Belgian coach Marc Wilmots is confident that his Belgium team will avoid this potential ‘banana skin’.

“We are ready, we know everything about Algeria, but what I’m interested in is that our players know all about it,” Wilmots said.

With players of the calibre of Eden Hazard, Romelu Lukaku, Jan Vertonghen and Thibaut Courtois in the side, Wilmots should be confident and the bookies are backing them. Belgium are hot favourites to win it at 1/2 with BetFred while Algeria are very much the outsiders at 7/1.

Algeria have some dangerous players including striker Nabil Ghilas who plays his football with Porto and has two goals in just five senior appearances. However, it’s all about the Belgians who should be a banker here. 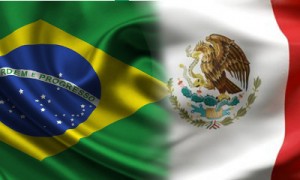 Pre-tournament favourites Brazil were hardly convincing as they beat Croatia by three goals to one on the opening day but there was enough quality to sound out a warning to their opponents for the remainder of the finals. Two goal Neymar is clearly in form and is our first tip at 10/11 to score in 90 minutes.

As for Mexico, their 1-0 victory over Cameroon may suggest that the game was a tight one but the South Americans had two perfectly good goals ruled out and should really have won more comfortably. The Mexicans can certainly challenge their opponents but are rank outsiders at 10/1. Meanwhile, the draw is at 5/1 and a victory for Brazil quoted at 1/3 with Winner Sports.

It could be another uncomfortable night for the host nation but we expect Brazil to come away with the points.

Fabio Capello’s Russia were strong in qualifying and anyone who thinks the Belgians have been overhyped can get some good odds on this side throughout the tournament. Russia are the favourites at 6/5 with BetFred for the win and will rely heavily on main striker Aleksandr Kerkhakov who is priced at 11/2.

However, those that remember back to Euro 2012 will recall the goal scoring exploits of midfielder Alan Dzagoev who is our tip at 3/1 to find the net in 90 minutes.

South Korea pose a threat up front and will tempt many at their win price of 29/10 with BetVictor while the draw is a definite option at 5/2. The danger comes mainly from Son Heung-min who plays in the Bundesliga with Bayer Leverkusen while former Arsenal player Park Chu-Young has a good record at international level.

The South Koreans shouldn’t be written off but this is a strong Russian side who start tournaments positively and they should take all three points on Tuesday.