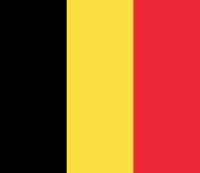 The Belgium national side is attracting a fair bit of excitement ahead of this summer’s World Cup after a strong qualifying campaign that saw them through by a wide margin over nearest rivals Croatia. The team is coached by former player Marc Wilmots and the squad are a tempting prospect in the outright winner market at 18/1.

Wilmots has now named his provisional squad for the 2014 tournament in Brazil and it features some familiar players from around Europe. Only two of the 24 names actually play their club football in Belgium and that fact is an indication of the quality and depth of this line-up.

Players such as Eden Hazard and Jan Vertonghen are courted by the top sides across Europe but who has Wilmots trusted with the job of taking the trophy to Belgium for the very first time?

Goalkeeper Thibaut Courtois is only 22 but he is already recognised as being one of the best stoppers in World Football. Courtois currently plays his football with Atletico Madrid and if he loses form or picks up an injury, Wilmots has an able deputy in Liverpool’s Simon Mignolet.

Belgium’s defence is a settled and an experienced one and it will be led in Brazil by Vincent Kompany. The Manchester City skipper is likely to sit alongside Jan Vertonghen, Toby Alderweireld and Thomas Vermaelen but there may be a slight concern over two members of that back four.

Tottenham’s Vertonghen has been injured while Alderweireld has been overlooked by new club Atletico Madrid and a lack of game time may just be a slight issue.

Belgium can arguably boast the strongest midfield in the tournament with a host of big name players. Chelsea’s Eden Hazard is Wilmots’ creative key while Manchester United’s Marouane Fellaini can push forward and add to his side’s threat up front. Fellaini’s club team mate Adnan Januzaj is an exciting addition to the squad after pledging his international career to the country of his birth.

Meanwhile, Mousa Dembele adds a defensive foil and the centre line looks to have a perfect balance going into this tournament.

The strike force is one area where Belgium look relatively weak following the injury suffered by Aston Villa’s Christian Benteke. Wilmots has named only three centre forwards – Romelu Lukaku, Dries Mertens and 19 year old Divock Origi. Lille’s Origi has yet to win a full cap and the three men have just seven international goals between them.

The Belgians failed to qualify for the 2010 World Cup in South Africa and that broke a run of six consecutive appearances at the finals. Their best performance came in 1986 when Guy Thys’ men made it all the way to the semis before losing 2-0 to eventual winners Argentina.

Their record since then has been mixed and although Belgian sides are generally capable of getting out of their group, the first knockout phase has proved to be a problem in the past. The 2014 Belgium squad have been placed with Algeria, Russia and South Korea so progression to the round of 16 shouldn’t be a problem from a relatively easy section.

Critics will point to the absence of Benteke and suggest that Belgium will struggle to live up to the ‘hype’ in Brazil but in reality, Wilmots doesn’t necessarily rely on his strike force to provide the goals. In qualifying, five men topped the Belgian scoring charts with two goals apiece and if the responsibility is shared in a similar fashion at the tournament, Belgium to win World Cup may yet prove to be a top value pick at that 18/1 price.