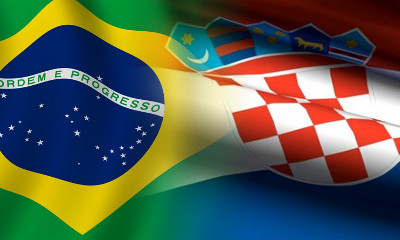 The wait is finally over as the biggest tournament in football gets underway on Thursday. Hosts and pre-tournament favourites Brazil are fully expected to breeze past the Croatians but history tells us that opening matches in any competition are far from straightforward.

In 1990, World Champions Argentina crashed to lowly Cameroon and that’s just one example of opening ties that haven’t always gone according to plan. Brazil have also had issues at the start of the World Cup: Four years ago in South Africa they made hard work of a North Korean side and they also struggled to overcome Turkey in 2002. Both of those matches ended in narrow, 2-1 wins to the Brazilians.

Brazil are heavily backed throughout the group stage and the best available odds on a win for the host nation are 1/3 with Winner Sports. Croatia are the outsiders at 11/1 while the draw is quoted at 17/4 .

Croatia have been strong in previous tournaments but they can also be very inconsistent. In their qualifying group ahead of this tournament, they started out by matching Belgium point for point but some poor results at the end of that stage included a shock home defeat to Scotland. Brazil should certainly win it but history shows us that it may not be as comfortable as the pundits expect.

Brazil’s Neymar is among the favourites to win the Golden Boot at the end of this tournament and the Barcelona striker heads the first goal scorer betting for this match: Neymar is at 7/2 with strike partner Fred following at 4/1.

Brazil offer some good options in midfield including the exciting Bernard at 11/1 and Chelsea’s Oscar at 8/1. Once again, those prices can be found.

Croatia hardly feature in the first goal scorer market but the dangerous Nikica Jelavic is worth a look at 16/1.

Neymar also leads the way in the official FIFA Man of the Match betting at 5/2 with Ladbrokes. A better pick however would be Oscar who has been outstanding in the Premier League this season. The Chelsea man is quoted at 10/1.

Elsewhere, there are over 300 markets to choose from for this game so take your time to study individual form and pick your tips.

One outstanding price lies in the both teams to score bet which you can back at 17/10 with Coral. Brazil may be tighter at the back than they have been for any World Cup but Croatia are certainly dangerous going forward and that’s a great price.

Croatian striker Jelavic claims his team have nothing to fear as they prepare to face the pre-tournament favourites.

“Brazil are my favourites for the tournament but we have quality players too. We can qualify, we have nothing to lose,” said the Hull City man.

Meanwhile, Brazil’s Dani Alves says that his side are looking to get off to a positive start. Speaking to the press, he said that the hosts were looking to send a clear message to their rivals.

Those are both predictable responses ahead of this tie but Jelavic is right when he says that Croatia have quality. This is a team that should come through the group in second place and while Brazil should win this opener, the Croatians will make things very tough.