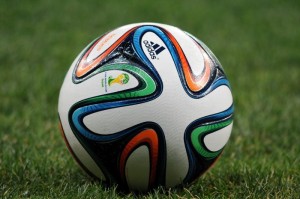 Adidas have been chosen to supply the world cup ball since 1970 and this respected manufacturer is back again in 2014 with the Brazuca. After the controversy surrounding the Jabulani creation four years ago, the tournament organisers hope that the new design will meet the approval of the teams and lead to a much more exciting competition.

The Jabulani, which was used in South Africa in 2010, was criticised for not flying on a true path through the air. There was too much swerve and bounce and players found it difficult to control as a result. Tests on the new ball have been far more encouraging however.

In 2012, a poll was launched with three names put to the public vote. Those to lose out were the Bossa Nova and the Carnavalesca while Brazuca romped home with over 77% of the vote.

According to the organisers, the name is intended to sum up the spirit behind the Brazilian way of life. FIFA claim that the word underlines Brazil’s thrilling approach to football, along with emotion, pride and a feeling of goodwill to everyone.

Originally, Adidas had handed the contract for the Brazuca to a firm in China but production had to be switched after the company failed to meet the demand. Fortunately there was a fall back and so, the Forward Sports Company of Pakistan took over and have done extremely well to fill in successfully at very short notice.

Forward Sports had been associated with Adidas since 1995 and were a logical replacement for the Chinese firm. Over that 19 year association, the Sialkot based company has produced balls for the Champions League and other domestic competitions around the World.

After the widespread criticism of the Jabulani ball four years ago, Adidas went through their archives and the Brazuca revives an old classic. The Tango ball was used with great success in previous years so the company utilised the basic same bladder and carcass for the 2014 version. However, a different design on the surface is intended to be an improvement as far as flight and bounce are concerned.

Testing is obviously a vital part of the development and Adidas have taken two years to develop their new product in order to make sure that it is absolutely perfect for the 2014 World Cup Finals. 600 players and 30 teams have been involved in the testing process and reports from individual greats such as Lionel Messi, Zinedine Zidane and Bastian Schweinsteiger have been very positive indeed.

As a final part of the testing process, the Brazuca has been used in official matches including the German cup final, and the Under 20 World Cup.

Adidas have also gone for a more colourful design with their new creation after the monochrome Jabulani was used in South Africa in 2010. This not only makes the Brazuca more attractive, it should be more visible to armchair fans and those attending matches inside the stadium.

Bold blue, orange and green stripes will also make this popular with young fans who will want to buy this as a souvenir.

Up to the task?

After the failure of the Jabulani, Adidas have taken steps to reassure football supporters that the Brazuca will not attract the same criticism.

“We do extensive flight path analysis and the results have shown constant and predictable paths, with deviations hardly recognisable,” said the company’s football director Matthias Mecking.

All tests so far have proved positive so we hope that the Adidas Brazuca helps us to enjoy one of the most entertaining World Cups since the tournament began.