If you’re looking for some value at this summer’s World Cup then you can try the discipline markets. This is generally a tough area to predict but previous tournaments do give an indication as to where your money should be placed and you can pick up some excellent prices. 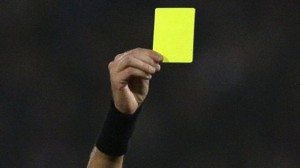 The 2010 tournament in South Africa yielded 17 red cards and that was significantly less than the 28 shown in the 2006 competition held in Germany. Bookings were commonplace however and the worst offenders aren’t exactly known for an aggressive style of football.

Louis Van Gaal’s Dutch team received 24 yellow cards in South Africa, including two for Johnny Heitinga in a bad tempered final against Spain. Contrast that figure with that of 2014 favourites Argentina who picked up seven yellows and no reds.

Heading into the 2014 competition, Argentina are out in front at 10/1 with Paddy Power while Holland are further back at 14/1 – also with Paddy Power. The Dutch may be a tempting prospect but it could be argued that a lack of discipline cost them their first ever World title. Van Gaal will remind his squad of that disputed fact and we could see a much calmer Netherlands team this time around.

South American sides tend to feature heavily in the betting and Brazil join the Argentines at odds of 10/1 with Paddy Power. The host nation are widely expected to go all the way in this competition and that will give them a better chance in this market but they are hardly the most aggressive side in World football.

Further down the list, Chile could be a tempting bet at 20/1 with Paddy Power after coming second to the Dutch with 15 yellows and a solitary red in 2010. That record came from just four games as the Chileans were eliminated at the first knockout stage.

Quick off the mark

Chile also picked up the fastest yellow card of the tournament as Humberto Suazo received a yellow after just eighty seconds in the match against Brazil. The South American side are in a tough opening group with Spain and the Netherlands so it’s hard to see them delivering a profit in the overall market but they are on offer at a great price of 24/1 to pick up the fastest booking in Brazil.

Back to the totals market and away from South America, some punters will look to the African sides in the hope of collecting a profit. Those with longer memories will recall Italia 90 when Cameroon received two red cards in the opening match before going on to collect 15 yellows in the tournament as a whole.

While on the subject of the 1990 tournament, it’s worth noting that the Argentines won this market by some distance with 21 yellow and 3 reds – two of which came in the final.

As for 2014, strong African teams include Ghana who are at 25/1 with BetVictor to pick up the most yellows and Nigeria at 40/1 – also with BetVictor. Ghana have progressed from the group stage at each of the last two World Cups but in 2014 they are in a tough section alongside Germany and Portugal.

Previous history shows us that while Argentina were particularly well behaved in 2010, they traditionally finish towards the top of the indiscipline charts and while they may be obvious favourites, Alex Sabella’s men seem destined to give us the profit in Brazil.