We’ve now completed a full week of action in the 2014 World Cup and there has been some great entertainment, along with a few surprise results along the way. For many of the teams competing in the second round of group matches, a win is simply vital and that is the case for four of the sides on show this Thursday.

These two sides have maximum points from the opening match and a further victory will guarantee a place in the play offs. The Ivory Coast narrowly edged out Japan by two goals to one while the Colombians were far more impressive in a routine, 3-0 win over Greece.

The South American side are now favourites to take all three points in this tie and you can back Colombia at odds of 11/10 with Winner Sports. Ivory Coast are quoted at 14/5 with BetVictor while the draw is at 5/2 with BetFred.

James Rodriguez is one of the most exciting players in the world right now and after the 22 year old scored the third goal in that 3-0 victory over Greece, he could be an option in the anytime goal scorer market at 13/5 with William Hill.

Overall, form suggests that this should end with another three points for the Colombians. 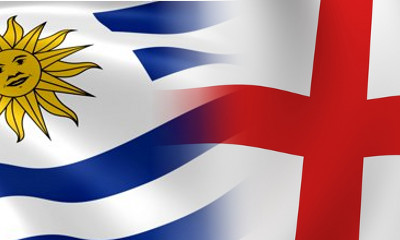 While this tie isn’t exactly ‘winner takes all’ it is a case of ‘loser gets nothing’ and if either side is defeated it will spell the end of their tournament. England knew it would be tough against a strong Italy side and there was no disgrace in losing but the Uruguayans played their part in the shock of the world cup so far – going down by three goals to one against unfancied Costa Rica.

Of the two sides, England played the better football in their opening fixture and they are the favourites here at 6/5 with BetVictor. Uruguay will hope that the return of Luis Suarez gives them greater impetus and the South Americans are certainly tempting at 27/10.

Liverpool’s Suarez has enjoyed a prolific season at club level and could be a sound pick at 2/1 to score in 90 minutes. As for the game, both teams should be looking to attack, otherwise they’re out of the competition and we are backing a high scoring draw at 5/2 with BetFred.

This is another match where the losing team will be eliminated from this competition and while the bookies have identified a clear favourite, current form makes this a little more difficult to predict. Japan lead the way at win odds of 6/5 with William Hill and will probably consider themselves a little unlucky to have gone down to Ivory Coast after taking a first half lead.

Greece have caused some upsets in major tournaments down the years but that showing against Colombia suggests they are a poor team in comparison to the one that lifted the European Championship Trophy in 2004.

The European side are very much a long shot at 27/10 with BetVictor and even the draw looks unlikely at 12/5. Once again, this is a game where both sides will need to attack from the very first whistle as the team that loses will shortly be on the plane home. We’re backing Japan but over 2.5 goals at 8/11 with Stan James may be a safer punt.