Brazil are hot favourites to win the 2014 World Cup at a best of 3/1 with BetFred and Head Coach Luis Felipe Scolari has picked a strong squad to challenge for the trophy on home soil. There will be some familiar faces in this summer’s tournament along with some notable absentees but are the hosts equipped to justify that favourites tag? 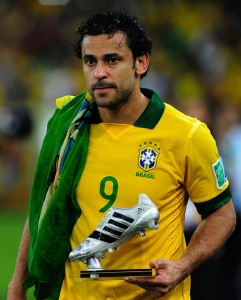 Scolari has a decision to make over his keepers and it’s interesting to note that Botafogo’s Jefferson has been handed the number one jersey. The 31 year old has just nine caps, compared with the 78 held by Julio Cesar but with Cesar sidelined by QPR last season, Jefferson has more game time under his belt.

The back four looks straightforward enough with Dani Alves, David Luiz, Thiago Silva and Marcelo forming a solid defensive line – something that isn’t always associated with Brazilian teams. The midfield has a good balance of flair in Oscar and Willian and solidity in Paulinho while Neymar will lead the line.

Fred has been handed the number 9 shirt but Hulk may be a more effective strike partner for Neymar. Scolari’s numbering has confused things a little but the starting line up for the opening game should read, 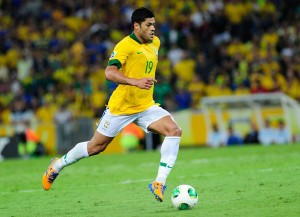 Those great Brazilian sides of the past were built on sheer skill in the midfield while the back four was traditionally vulnerable. In 2014 however, Scolari is blessed with one of the most experienced defences in the tournament and Brazil shouldn’t concede too many at the back.

The midfield remains a creative force while Paulinho will give it a defensive edge if he is selected. Oscar and Willian should really flourish in home conditions and will provide brilliant entertainment throughout the tournament.

Neymar and Hulk are a mouth-watering partnership up front but both have experienced difficult seasons at club level and there is a question over form.
Weaknesses

Away from the form issue surrounding the top two, it’s tough to find a weakness in this Brazilian side. However, anyone staking on the favourites might just be concerned about the goalkeeper.

Julio Cesar has played little competitive football over the last twelve months while his potential replacement Jefferson is inexperienced at the highest level.

In defence, Captain Thiago Silva is the most valuable player for the host nation although he is just part of the strongest back four that Brazil have enjoyed in many years.

Brazil’s midfield looks stunning but while the likes of Oscar and Willian provide the flair, Paulinho is vital for linking defence and attack. The Spurs man may not be as exciting on the ball as some of his team mates but he is a vital part of Scolari’s set up and he also scores more than his share of important goals.

In attack, the focus is on Neymar who is an 11/1 shot to finish the tournament as the leading scorer. It’s not been the easiest of first seasons at Barcelona but the striker should be more comfortable, back in the national fold.

Any number of Brazilians could prove to be the player of the tournament but the one man who truly excites us is Oscar. Chelsea fans have seen only glimpses of his brilliant best but the 22 year old is primed to deliver the breath taking play and spectacular finishes that we associate with the greatest Brazilian sides.

It’s hard not to get excited about Brazil in this year’s World Cup and while some may feel they are too short at 3/1, this is the most complete and balanced team that they have fielded in any tournament to date.